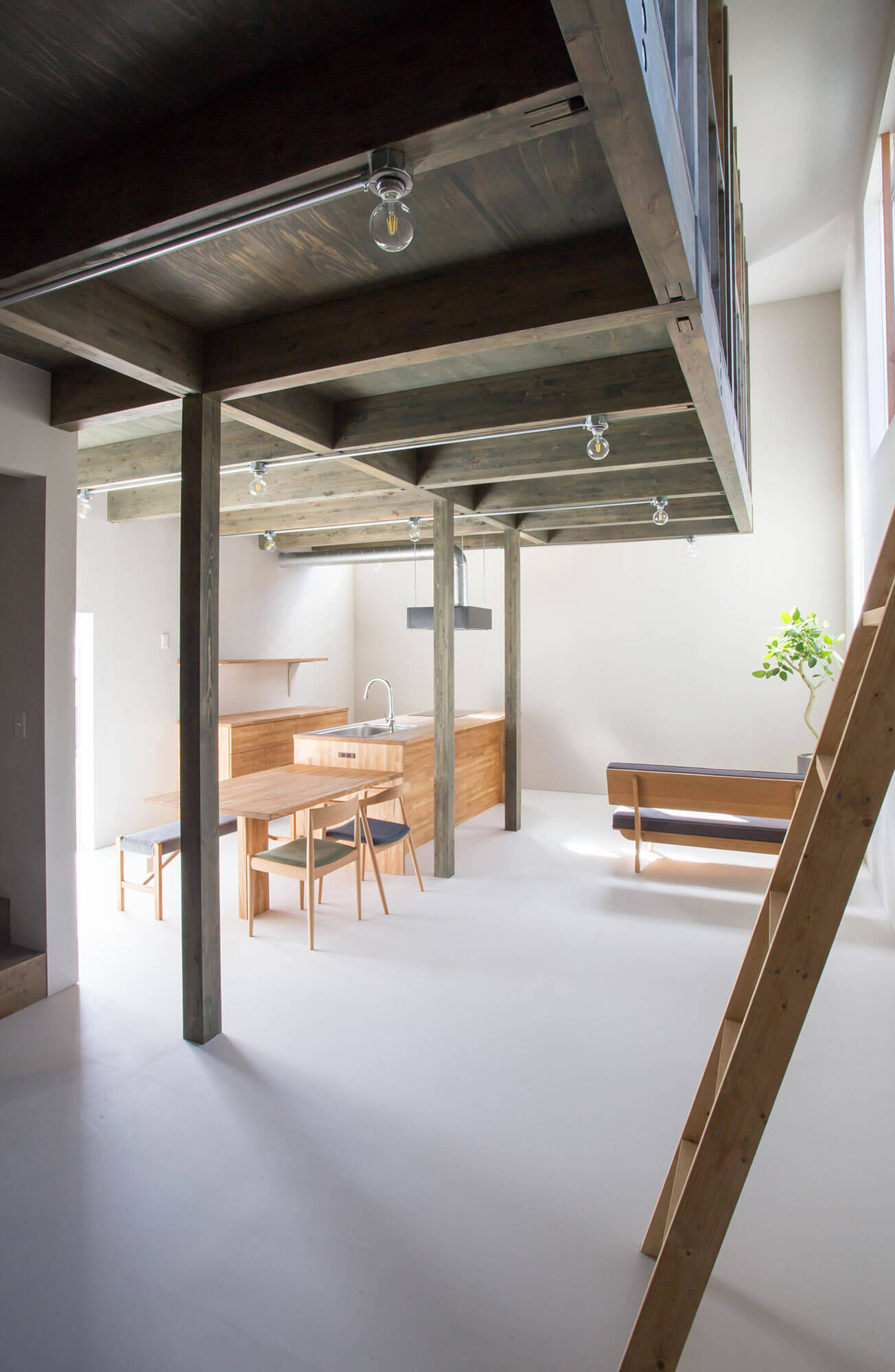 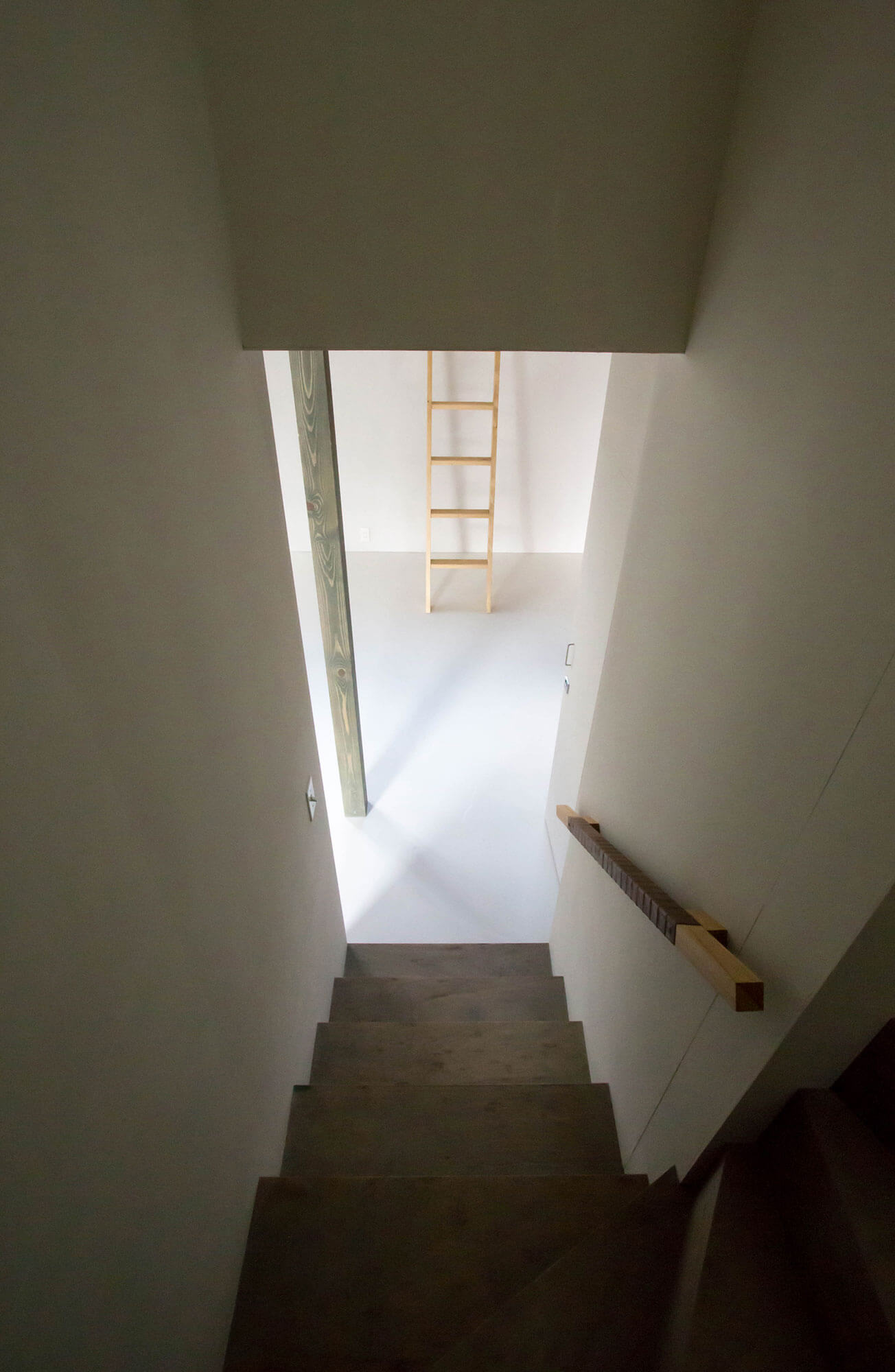 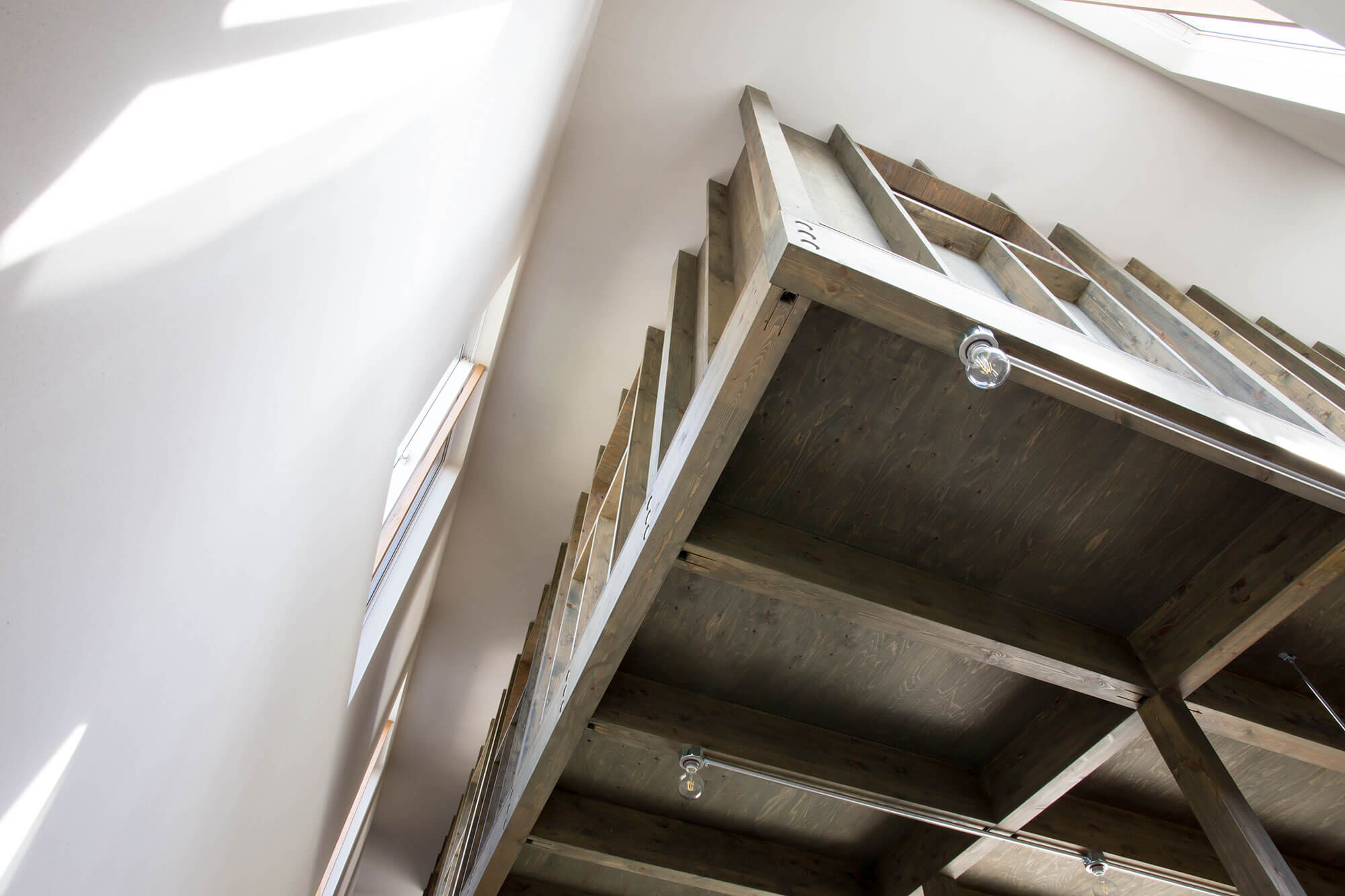 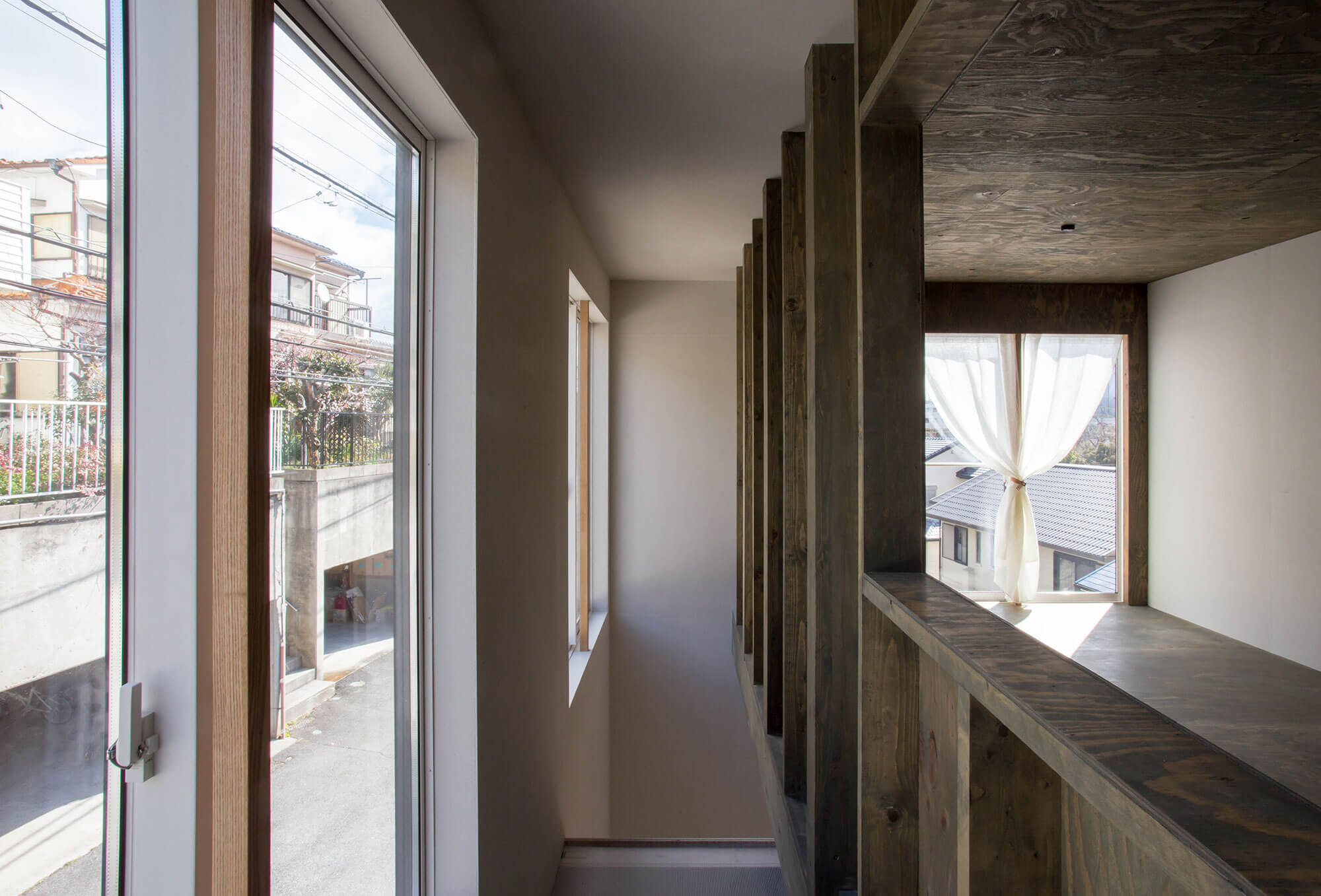 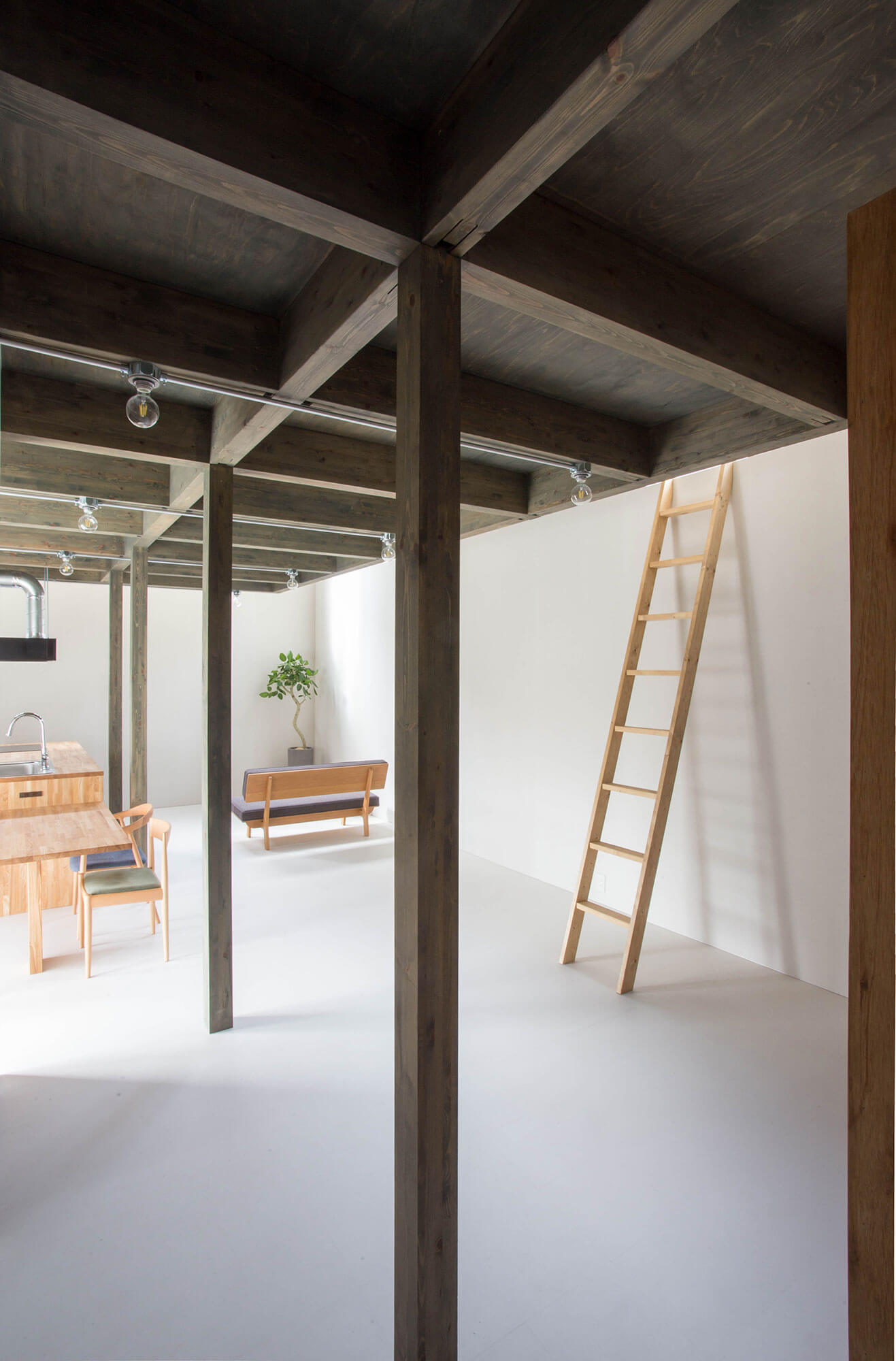 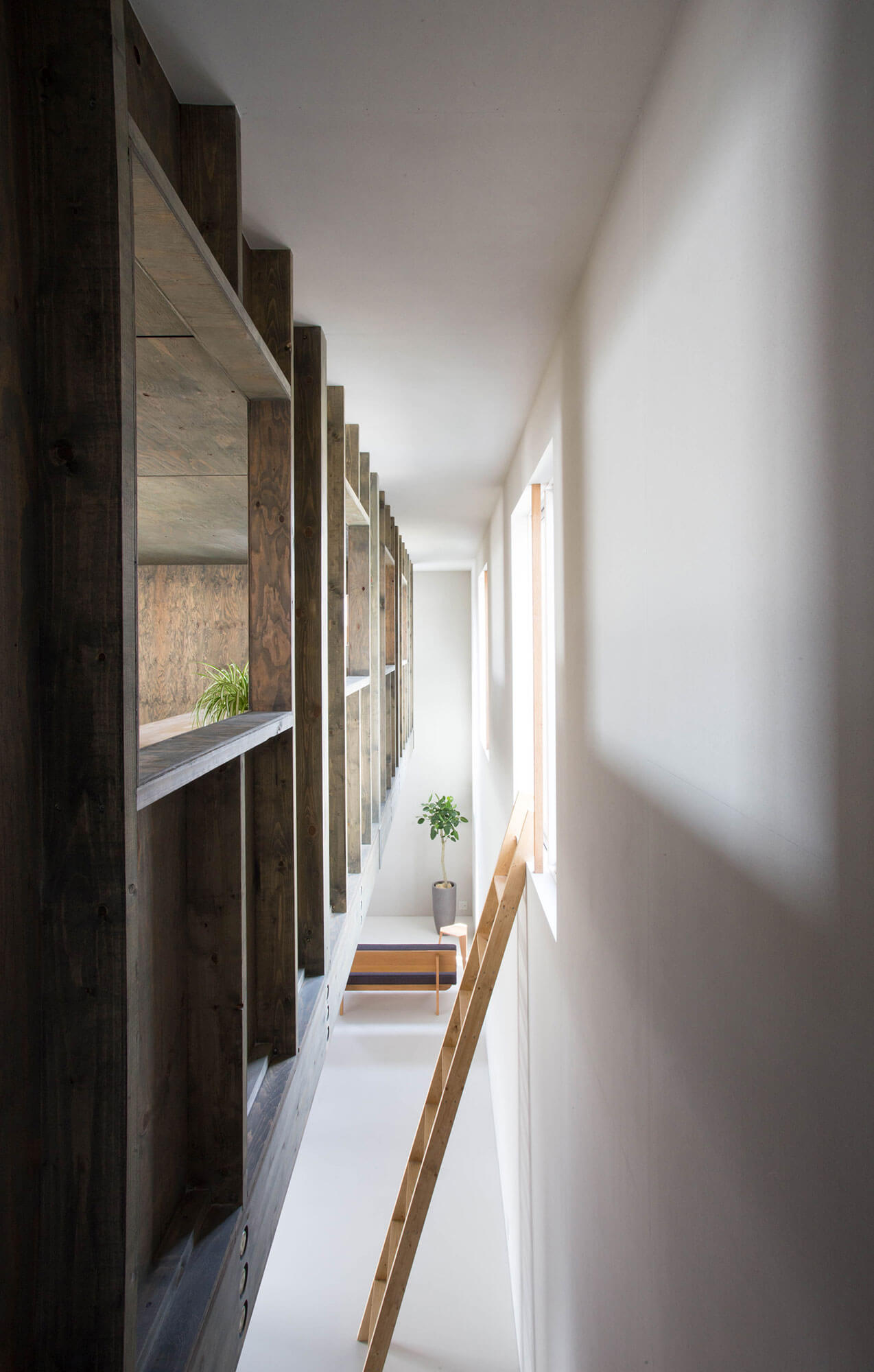 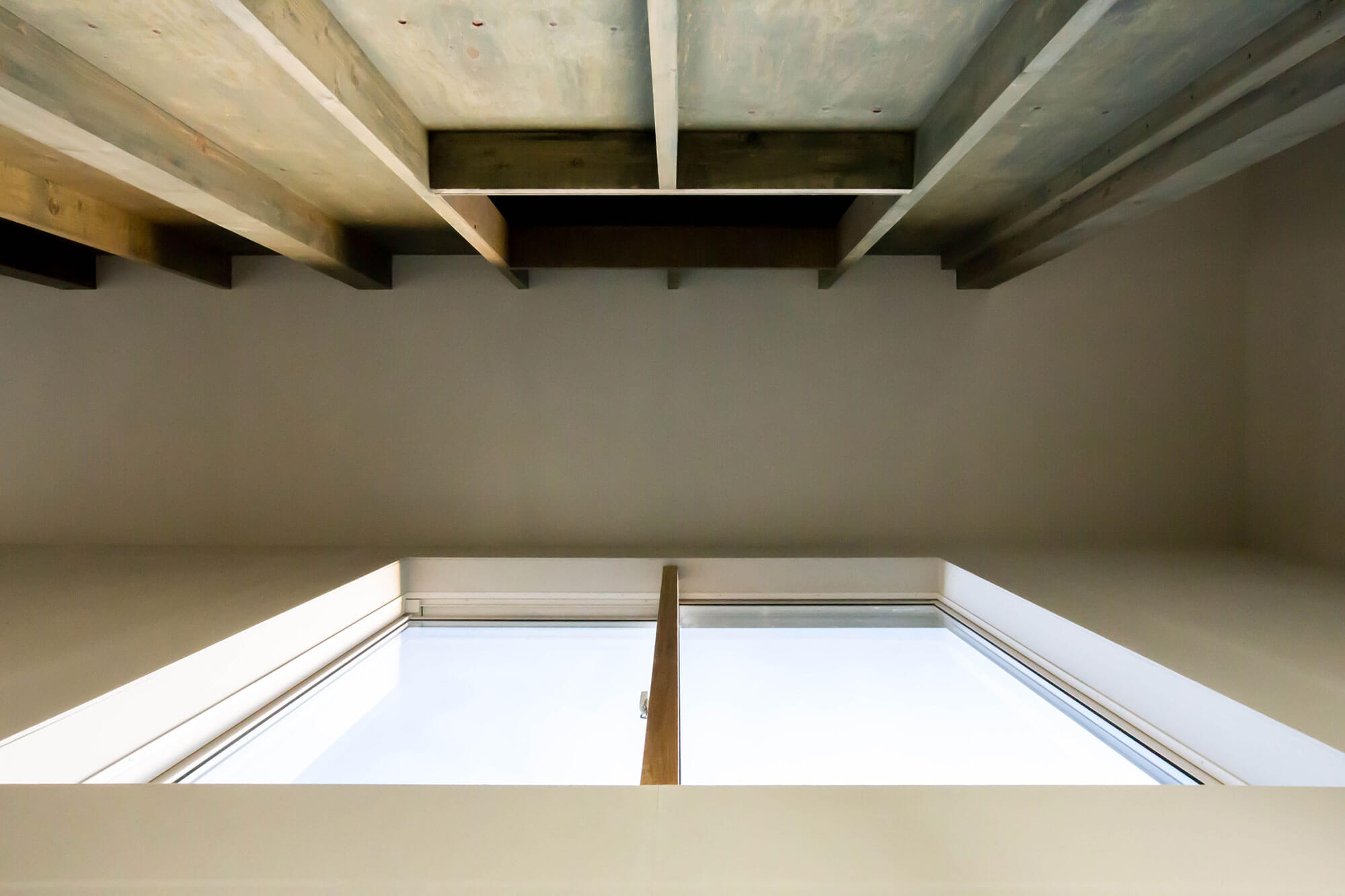 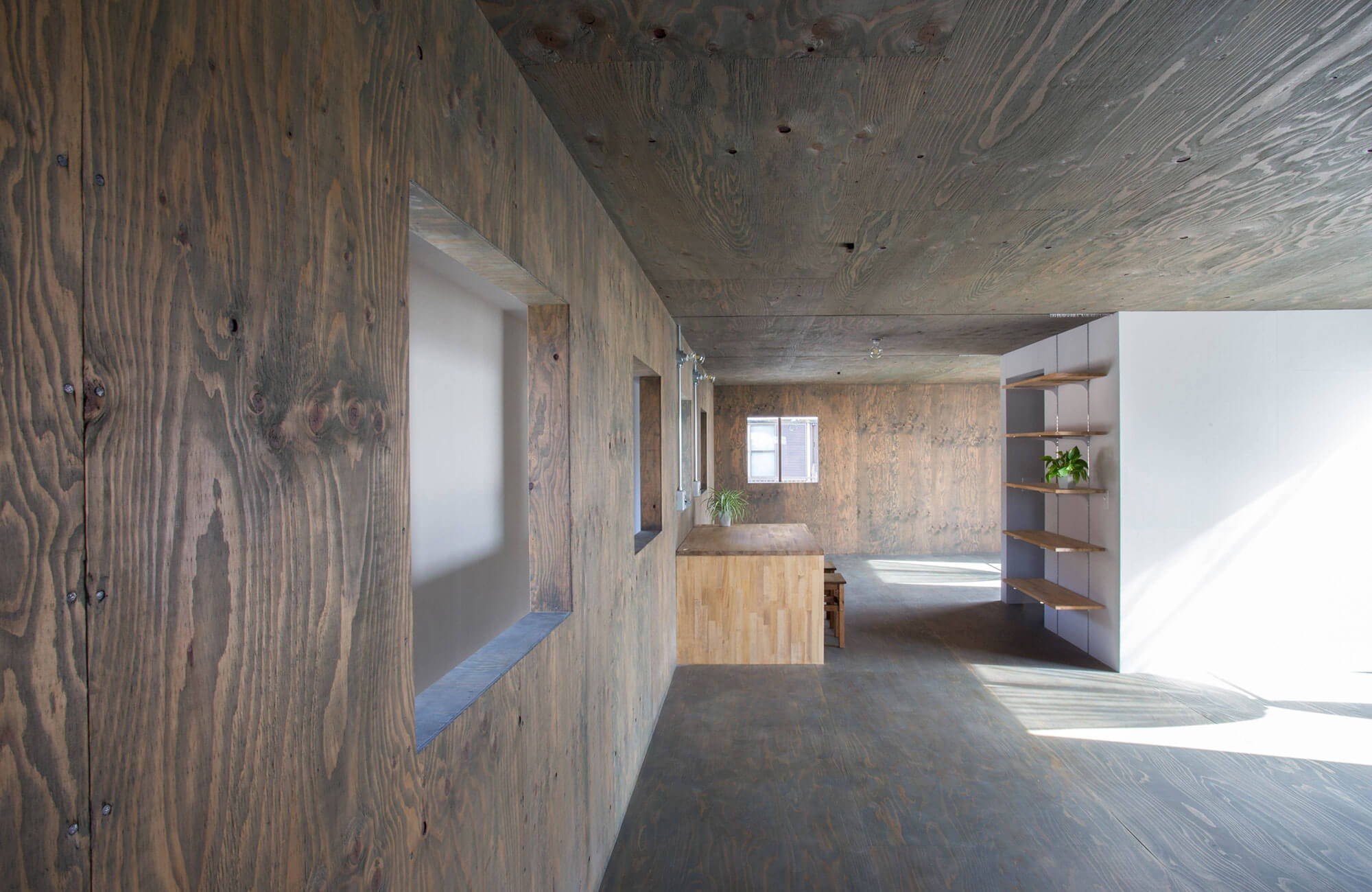 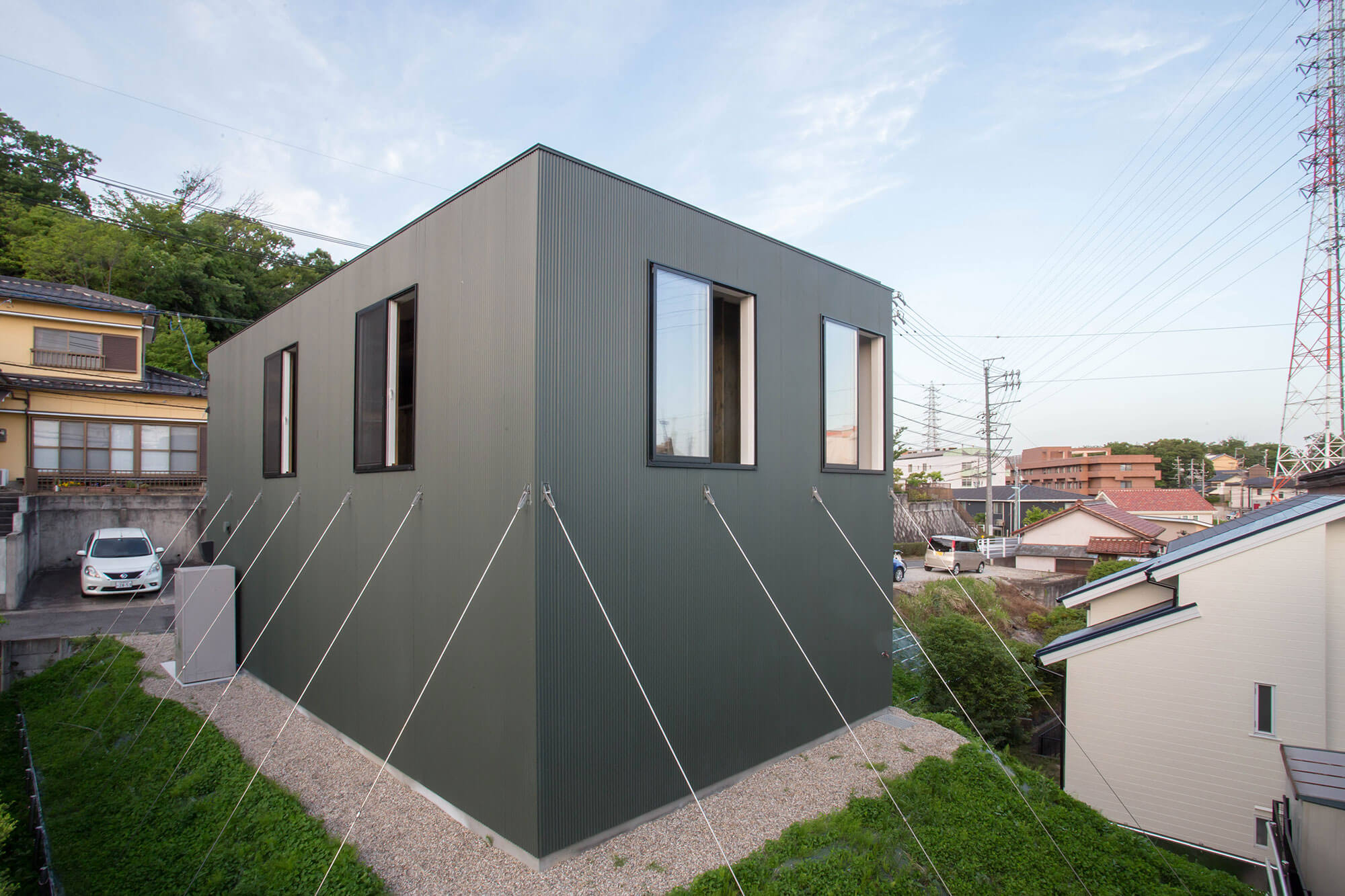 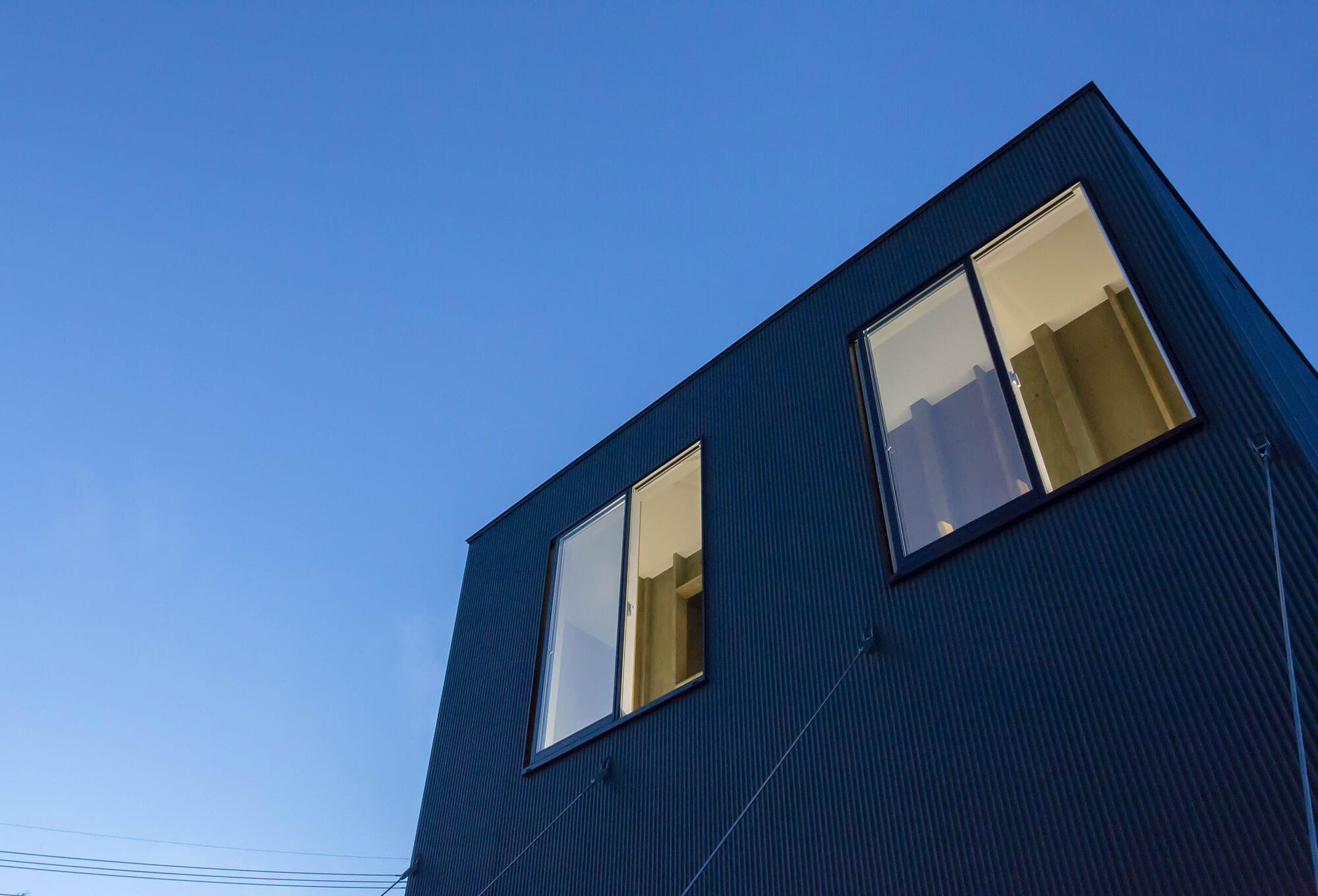 The client was two young couples who consulted from the site selection. In Japan, many new single-family homes with a site, so-called "built-for-sale houses" are sold. In housing development, it is common to divide the land into small areas and construct a two-story house to fill the site. As a result, the interior space of the house is segmented to maximize the number of rooms for ease of sale. As a result, the cityscape suddenly becomes denser, lighting and ventilation conditions worsen, and the residents are confined in an inconvenient and overcrowded interior space. The owner of this time also previewed various "built-for-sale houses" from the budget but hesitated to purchase because of the tight cityscape and floor plan of the houses. We thought that by proposing a house with the same price range as a “built-for-sale houses” but with a large land and internal space, it would lead to a gentle change in the density of the cityscape and a comfortable life.

The site is located in a dense residential area in a rural area. Although it is a large land exceeding 300 m2 (this area is large for a Japanese house), half of the site was a sloping land, so a “built-for-sale house” was not built and was left as a vacant site. Therefore, the unit price of the area was sold at less than half the price of the surrounding market.

First of all, the building volume is placed on the flat area of ​​the site so as to avoid various Japanese regulations such as the cliff ordinance line, the road set back line, and the fire spread line (3 m) on the first floor. As a result, the architecture is set back from the boundary of the site, so that it is possible to obtain stable light and ventilation while providing space for the town despite the dense residential area. The interior space is planned to have a structure in which a second floor like a hut is hung from the roof in a large space. About 770 mm wide narrow void space was designed on the three sides of the west, south and north where the neighbors are close. This void space not only provides a buffer zone from the surrounding buildings, but also brightens the upper and lower floors with soft light on a limited budget, while also connecting the lives of families. In order to create this large void space, dia. 10 mm ready-made braces are installed outside while extending to a slope to withstand the pressure of the wind. They visually connect the surrounding ground obtained by the setback to the architecture and imagine the intertwining of planting on a sloped land in the future.

This plan is one answer to the overcrowding of the town and floor plan created by "built-for-sale houses" that was considered from economic rationality. We think that the architect will reconsider the potential of the site together with the owner, and plan the architecture suitable for each site with the same budget as the "built-for-sale house", and the optimal density, space, and living will be created for the town and people. Getting big land and construction cheaply leads to a peaceful future.